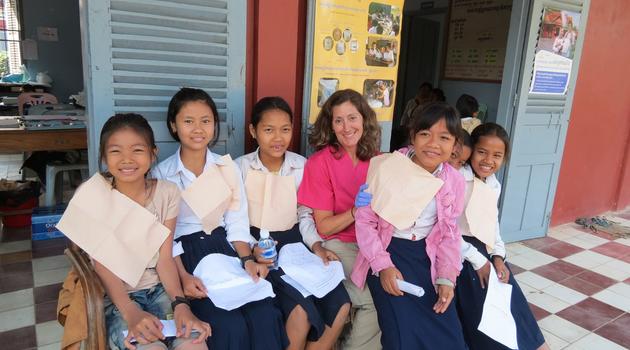 Currency:  Almost everyone exclusively uses dollars in the tourist industry as the Cambodian riehl denominations are too small for most purchases (4000 riehls = $1).  You don’t need to change money and the ATM’s also dispense dollars.

I had the chance to revisit Cambodia after eight years and when I entered Siem Reap I felt like I had landed on the moon.  Except for the temples at Angkor, nothing seemed familiar.  The city has grown so much, adding numerous hotels, restaurants, ATMs and tourist shops that it did not feel like the Cambodia that I experienced the first time.
Seeing people riding three deep on a scooter was reminiscent of my first visit,  but seeing the last passenger, a monk in a bright saffron robe, carrying a computer case was new.  Like most Asian countries, scooters are everywhere and one of my favorite sightings was one scooter with a dog as the first passenger, his paws firmly planted on the handlebar, with a young man as driver and a young woman as passenger.  But if you really want to see local life, you need to leave the tourist locations and head for the country.  As we were working in the clinic, we didn’t have as much time to explore but one morning we went to a local market that was just down the road from the school where we were working.  We were greeted with smiles from the local people as we walked through, asking permission for pictures and then sharing the results amid lots of laughter.  How funny would it be to see tourists taking pictures of us as we shopped for groceries?

Volunteering with Global Dental Relief - This was the reason for my trip to Cambodia.  I joined a group of dentists and non dental volunteers to conduct a dental clinic for children at the Rolous school, located just outside of Siem Reap.  We spent 6 days providing much needed dental care to the children at the school.  For most of these children, it was their first experience with a dentist.  Not always the best experience for anyone, I watched the dentists extract bad teeth, fill cavities, and rebuild entire teeth decayed down to nubs.  I know that some of the children were stunned at the results and hopefully encouraged to take better care of their teeth now that they had some guidance and direction.

Phnom Penh - Looking at the landscape from a rooftop during the sunset, a number of high rise buildings are beginning to populate the horizon, the building outlines covered in green netting.  This is a city that was suspended in time about 40 years ago and is eager to catch up with the rest of the world as it grows and develops.

To Do:
Tuol Sleng Genocide Museum (S-21 Prison) - This place was a school converted into a notorious prison where thousands were killed.  As you walk through the rooms converted into numerous tiny cells, you are confronted with the photos of hundreds of the men and women who died there.  It is quite haunting to look into the faces of these people, realizing how terrified and scared they probably were during their internment.
Of the eight survivors that were found there, one was there on the day we visited, a much older man now with a book he had written about the ordeal.  It’s always hard to believe such violence has occurred in modern times but the atrocities  took place during the 70‘s.  Our guide’s description of some of the torture that occurred here, “Children were thrown from upstairs to downstairs”.  He shared his own personal story of how his family was also removed to the country and his father was forced to leave his family and to to another camp, never to return.   There are numerous horrible stories of what the people of Cambodia endured during the reign of Pol Pot.

The Royal Palace - The king still lives here alone.  He is single and perhaps looking for love...  Like most palaces, it is beautiful and filled with curious tourists.  I found myself  snapping multiple photos to try and capture the wonder of the place.  The grounds include gardens with water lilies and spirit houses.  Go early before it gets too hot and wander the opulent grounds.

The National Museum of Cambodia - This small museum is worth your time to see the historical sculptures and artifacts.  The experience is definitely enhanced with a guide to share the relevant stories on the many pieces of art.  It is an open air museum constructed around a lovely atrium that makes for a enjoyable visit.

The Russian market - Like most markets in Asia, this is the Target/Walmart/supermarket of the city.  You can find underwear, raw meat, tourist trinkets, groceries, and food all under one roof.

To Do:
Angkor - This complex is the reason that most people come to Angkor Wat.  And since my last visit, the tourism industry here has really expanded.
We arrived early after a flight from Phnom Penh and our first stop was Angkor and the famous Angkor Wat.  A great guide is essential to understand the history and how the temple was built.  Our guide, Lim, provided a description of the carvings encircling the famous temple, the story of good and evil and the beginnings of earth.  It was interesting to hear how people used these stories to control behavior.  For instance, there were carvings that suggested misbehaving children would be sent to hell to have their bones crushed by demons.  Thieves and bandits would suffer tortures similar to the crimes they committed.  The stories are well documented in the carvings that seem to go on for miles as you explore the most famous temple.  Make sure you allow enough time to really walk around and see everything.  There are also some steep ascents to the upper levels.  Take your time, hold the handrail, and enjoy the views.

Floating Villages/Kampong Kheleang - We left Siem Reap one day to see the famous lake villages (homes on stilts) and the floating villages on Tonle Sap lake.  Again, our guide took us to a place with few, if any, other tourists so we could feel the “real” Cambodia.  We walked down a dusty dirt road surrounded by homes built on stilts on each side.  Children waved to us, ran out to say “hello”, and gladly posed for photos.  As we were visiting on the eve of the Chinese New Year, we were also offered wishes for good luck in the New Year.  Then our group boarded a small narrow boat for a foray further into the lake, cruising by small villages that existed entirely on the water.

Phnom Kulen National Park - We hiked up a sacred mountain to see a temple overrun with visitors on Chinese New Year.  Everyone seems to head for the temples to ensure a fortuitous start to the new year.  For a small donation you would be given a small red bracelet blessed by one of the monks at the temple.  On our way to the temple, we stopped along a river with carvings in the rocks and received a blessing from a Buddhist nun and were also “honored” by a local woman who rubbed our joints with water from a spring said to have special healing powers.

Phnom Krohm - Rather than join a cast of thousands for the sunset at Angkor Wat, we decided to visit another temple one evening, a 15 minute tuk tuk ride from the city.  When we arrived, our driver waited for us at the bottom of the hill, while we ascended several steps and then followed a curved road to the top of a small hill.  There was a small temple at the top represented by three small towers.  We stood looking at each other, wondering, “What is so special about this place?”  Further exploration led us to a steep cliff edge revealing a stunning view of the countryside, the rice fields glowing under the setting sun and Tonle Sap in the distance.  We climbed down to a place where we could sit and enjoy the view, passing around some wine as we toasted the sun’s descent into tomorrow.  As we sat in the after glow of sunset and finally started the journey back down the hill to our tuk tuk, we were suddenly surrounded by the high pitched sound of thousands of bats fleeing the three small buildings at the top of the hill.  We stood and watched them flow into the oncoming night, mesmerized by the force of their furious exit.  And in a matter of minutes, they were gone with only my short video as a reminder.

Night market and Pub street - This is truly the land of tourists.  Wander through the street and the small walkways of the market, greeted by trays of cooked tarantulas, crickets, beetles, snakes, and shrimp.  There are also stalls full of tourist trinkets, clothing and food.  My reaction to Pub street -  who really wants to hang out in a place where drinking seems to be the main focus?

Lodging:
Shinta Mani Resort, Siem Reap - The management at this hotel provides an environment and framework for the employees to learn English and customer service so they can work within the tourist industry.  The staff was phenomenal and the hotel also supports local volunteer efforts to support the community.  We were lucky to stay here as they accommodated for our thrifty budget to support our volunteer efforts.

Spa/ Massage:
Sojourn - spa and restaurant tucked away from the city
Body Tune - a spa in Siem Reap where you can enjoy everything from massage to a pedicure

Day Tours and Travel
Beyond Unique Escapes - Since I was traveling with a small group, we arranged all of our day trips through this company.  They were excellent!