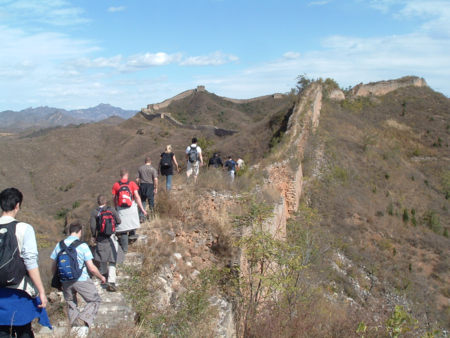 Beijing, Xian, Shanghai, Yangzhou, and Hong Kong.  Traveling through China for three weeks, I became aware of how many people don’t speak any English (none, notta), are so curious about Westerners that they will take stealth photographs of friends with you conspicuously in the background, and how awful Americanized Chinese food really is.

I joined a small group for independent travel and although we travelled from city to city as a group (which was almost essential if you don’t know Chinese), there was the flexibility of unstructured time in the cities so I could wander alone or with others in the group.

I just can’t stop thinking about the wonderful dumplings in Beijing in a small and inconspicuous shop where we were the only outsiders.  I think that the locals secretly enjoyed watching us devour the perfectly cooked dumplings while passing around a few cans of beer.  And so much more sophisticated than the night market.

China was full of firsts - eating my first fried scorpion, enjoying a tea ceremony outside the walls of the Forbidden City, watching a REAL Kung Fu show, attending the Chinese Opera (nothing like a Western opera), being amazed by the Chinese acrobats, watching a procession of brides in white storm a large store in Xian, kayaking on the river in Yangzhou, walking through the market to see caged dogs sold as fresh meat, taking a painting class and learning the technique to create bamboo on paper, participating in a cooking class to perfect my wok skills, and wandering alone with almost zero opportunity to ask for directions.  I was hooked.

Beijing - The Forbidden City, Summer Palace, Tiananmen Square (complete with the iconic painting of Chairman Mao), Kung Fu show (advertised as the most exciting Kung Fu show in the world!), the Chinese opera, and an authentic tea ceremony.

Great Wall - There are touristy sections that have been refurbished for hordes of visitors but we were lucky to have a local farmer as a guide for the day as we hiked along a much more remote section of the wall.  We enjoyed the view for hours as the wall snaked along hill tops disappearing into the horizon.  The experience included some especially narrow sections where I felt precariously balanced atop the skinny high wall, crouched down so that the strong winds did not displace me and my unwieldy backpack.  The key was to stay focused on the endpoint and not worry about the fact that the wall was only a couple of feet wide - generous enough for walking but when I was evaluating the long drop on either side, it felt like only inches.

Xi’an - Most people journey to Xi’an to see the Terracotta Warriors as they are a short distance outside of the city and an overwhelming site when you see the immense clay army each with a unique face.  We opted to take a local bus to the complex and that experience was almost as exciting as the Warriors.  Perhaps the lack of a queue was a warm-up as we jostled our way, somewhat aggressively, to secure a spot on the bus.  Since I was with several other Westerners, we were all laughing in shock at this cultural disparity versus our normal lines and less frenzied approach to public transportation.  Other notable experiences:  Renting bikes to ride around the top of the ancient city wall, exploring the Muslim quarter and market, and visiting the Great Mosque and pagodas.  The influence of the Muslim culture is also reflected in the food choices - try the thick mutton stew with bread or the BBQ.

Shanghai - When walking the streets of Shanghai, I felt like New York City was a small midwestern city in comparison.  Shanghai is not only a sprawling large city, but the number of modern buildings gracing the skyline is truly incredible and many were still under construction.  Walk through the Bund, take the sightseeing tunnel underground to the other side of Huangpu River, visit the Shanghai Museum to be awed by the sophisticated and ancient pottery and china, and make an effort to see the Chinese/Shanghai acrobats.

Guilin - Guilin is a bit of a gateway for several experiences including a two day hike through the Longji Rice Terraces.  Walking the greens and golds of the rice terraces was a peaceful compliment after spending time in three very large Chinese cities.  The hills were carefully sculpted to support the stair-stepping rice fields and the occasional cow and calf wandering through the fields seemed like random lost tourists.  At the end of the first day of hiking, we were greeted by able-bodied women ready to massage our tired legs and feet and we also had the opportunity to see the Yao ethnic minority women washing their long black hair in the river.

Yangshuo - Just a short drive from the rice terraces, we spent a few days in this growing village enjoying the variety of activities there and in the countryside.  We spent one day biking in the Guangxi region with a local farmer, Farmer Tan, complimented by the best meal of the trip cooked by his wife and served at his house among the fields.  The route included a stop to hike up the famous Moon Hill.  As we cycled through the rice fields, balancing on the narrow walk ways above the wet paddies, we were surrounded by the dramatic limestone peaks known as karst in the background.  While in Yangshuo, there was also an opportunity for kayaking along the river, taking an art class where I learned the technique for painting bamboo, enrolling in a cooking class that included a visit to the local market for supplies (where we were able to witness caged dogs sold as meat), relaxing with a Chinese massage, and a nighttime excursion on the river to witness a fisherman with his cormorants.  There was even some time to visit the small shops to look for souvenirs and have a Chinese chop (seal) made representing my name.   I do remember it being very dark at night as I headed back to my hotel so a small headlamp or flashlight will come in handy.

Hong Kong - Hong Kong is an instant immersion into the busy chaos of a large modern city.  At a minimum, take the tram to the top of Victoria Peak.  It is worth it for the tram perspective alone.  Since Hong Kong was our last stop on a three week journey, everyone was ready to enjoy the rocking night life of Lan Kwai Fong on Halloween.  And we had a strategy - buying alcohol in the 7-11 store to enjoy in the street versus paying the high prices in the bars.  The streets were full of people celebrating Halloween and in some cases it was difficult to decipher costume from clothing.

The trains!  If you really want to immerse yourself in the local culture, take a train through China.  Our group took several trains as we traversed the country.  An overnight train was not too bad but save yourself the torture of a 24-hour train ride.  There is no good way to clean up after hour twelve (the condition of the bathrooms takes a quick trip downhill) and even though the train cars are non-smoking, everyone thinks it’s a great idea to smoke in the space between cars.  The second-hand smoke escapes into the train cars every time someone walks between cars and that is quite an assault on your system when you’re not used to it. The bunks were fine, and linens are provided for the beds. The cars quiet down quickly once the lights go out at 10 p.m.  Of course, you are also awakened by some sort of communist march song at 8 a.m. reminding you that this culture is more regulated than our own.  Remember to sleep with your valuables - one person had their camera disappear and lost all of their trip photos.

Chop/Seal - This is a traditional Chinese seal used to sign your name.  I actually had one made and received another as a gift.  I’m still trying to reconcile why the two characters are different for the same name.  Hmmm……
Remember to take a card from your hotel when you leave as they usually provide the address and directions in Chinese on the back side.  Some hotel keys do the same.

Food:  You will be ruined for eating Chinese food in most parts of America again.  The authentic flavors in the different regions will introduce you to the splendid variety of foods and the creative cooking that makes Asian cuisine so unique.  Every dish seems to be a one-of-a-kind invention with the use of vegetables as familiar as tomatoes and eggplant to the more adventurous vegetables of the east such as bokchoy. The best way to eat Chinese food is with a group so you can sample a little of everything from Peking Duck to dumplings along with the plentiful rice and noodle dishes.  I always found myself wishing for more people at the table so we could order and try even more dishes.  Don’t forget to try the Dim Sum and do take a stroll through the Night Market in Beijing if you have a craving for fried crickets or mice.

One memorable meal - I bought a small baguette in a French bakery in Yangshuo served with fresh butter.  I had no idea how delicious that small loaf of warm bread would taste after the savory noodles and rice I had been having for breakfast every day.  Yum!!

And just in case you are homesick for American food, Starbucks, KFC, and McDonalds seem to be just as ubiquitous in the larger cities in China as they are in America.  Note the growing waistline on their children.