Arriving in Namibia, I wasn’t quite sure I was really in Africa.  Looking out the window, it seemed as if I had landed in the American southwest.  The drive to Windhoek was along a relatively smooth road.  It was a sharp contrast to my trip to east Africa where the roads were horrendous.  But the real trip had yet to begin.
I met up with a friend and we had arranged to travel with a group.  Our group journeyed around the country in a vehicle I christened the “carabus” to describe its self sustaining  touring abilities.  In our journey, we progressed from desert and dunes to the seaside, then on to Etosha wildlife park and finally back to Windhoek.  The striking contrasts between the desert, the ocean, and Etosha provided immense variety in a journey that took me from one end of the country to another.  The landscape was as varied as the group I traveled with and, ultimately, it proved to be an entertaining and interesting trip.

Our guide, Malvern, and our driver, Justin, were both from Zimbabwe.  Each day, they took time to wrap every suitcase and bag in plastic before storing it in the carabus to keep them clean as we traveled along the dusty roads.  This trip was no frills - no air conditioning on the carabus and our daily decision was whether to open the windows for air movement and the accompanying dust or be satisfied with a small crack and stifling heat.  We stopped by the side of the road many days for lunch which Malvern and Justin prepared while we sought out favorable biological relief areas.  This became quite the conversation topic as we reviewed the aspects of different areas and strategically sent each other in different directions, separating the men from the women.  There were not many other options for traveling in this country and the trip involved a lot of long drives.  Taking in the scenery was a big part of this trip and despite the amount of time spent on the bus, it was a beautiful way to see the country.  I especially enjoyed Justin’s t-shirt emblazoned with “Shit Happens, *T.I.A.” with a small footnote at the bottom edge of his shirt “*This Is Africa.”

How I traveled: I traveled with a friend from Australia (that I met traveling in 2009) and we booked the “Namib Lodge Safari” with Explore. Because Namibia is so big, this seemed the best way to see the country highlights in just 2 weeks.

Sights/To Do:
Sossusvlei (sand dunes) - Located in south Namibia, these are some of the largest and most incredible sand dunes in the world.  Be prepared for the extreme heat while enjoying this unique landscape.  As we walked across the dunes, sand managed to creep into my shoes until my feet were burning as if I was walking barefoot. Malvern had extensive knowledge of the plants and animals in the area, pointing out insect and animal tracks and describing how plants survived in the extreme environment.
We stayed at the Agama Lodge which was isolated and quiet, surrounded by sand with a swimming pool for relief, and overwhelmed with stars at night.  We enjoyed the sunset from a rooftop terrace with drinks followed by a wonderful dinner of game and other gourmet dishes.

Swakopmund (city by the sea and relief from the heat) - After the heat of the dunes, it was nice to spend a refreshing few days on the coast.  We chartered a small boat out into the ocean, enjoying champagne and fresh shucked oysters while watching dolphins, penguins and sea lions.  The drastic temperature drop actually required fleeces and jackets to stay comfortable on the water.

Cape Cross Fur Seal colony - We arrived in November, when the seals were giving birth.  Unfortunately, you had to submit yourself to the most vile ammonia aroma to see the new pups.  It made me think of being buried up to my neck in overripe litter-boxes.  Welcome to the seal colony.  Boardwalks were constructed so that you could walk over the seals, staying close while not interfering.  This colony consists of thousands of barking, crawling and sunning seals.  It was also a vivid mix of life and death as some of the newborns did not survive their naive new mothers.

Twyfelfontein Rock art - Ancient rock carvings with excellent and vivid pictures of the most prominent animals of the region such as lions, elephants, and giraffes.  On our way, we had the opportunity to stop by some small Himba villages to visit with the local indigenous people.

Petrified forest - You can walk through the remains of this forest, seeing the preserved petrified logs alongside modern and unique foliage.

Etosha National Park (safari) - Spend a few days in this park experiencing the wildlife.  We stayed at the lodges within the park and spent about 4 days of our trip here.  We were able to see multiple lions, some eating from a recent kill and even one mating couple who were conveniently right next to the road.  In some areas, we would go directly to large watering holes to see a great variety of wildlife.

Cheetah Conservation Foundation - This organization focuses on orphaned cheetahs and prepares them for release back into the wild.  They also raise a special breed of dog for the local farmers.  These “sheep dogs” help to drive off cheetahs before they can kill any sheep and eliminates the potential for the farmers to then kill the cheetahs.  You can plan to attend a feeding for the young cheetahs and the guides spend some time educating you on their programs.  It is definitely worth a visit.

Windhoek - There are several shops in the city and there was a craft mart that we visited to buy handmade souvenirs before we left for home.

To eat: You will have the opportunity to eat game meat such as kudu and springbok.  The worst food was the awful “English food” buffets at the resorts in the game parks.
The food outside of the parks is the best with a variety of game, beef, chicken and fish. Also, Namibia is very developed and when in the main cities you will have access to all of the necessities of western life.

Hotels:  We stayed in basic but comfortable lodges and guest houses.  A couple of places were especially memorable - the camps within Etosha were an unexpected surprise and were quite nice.
In Sossusvlei, the Agama Lodge was a real treat and the food was the best of the trip. 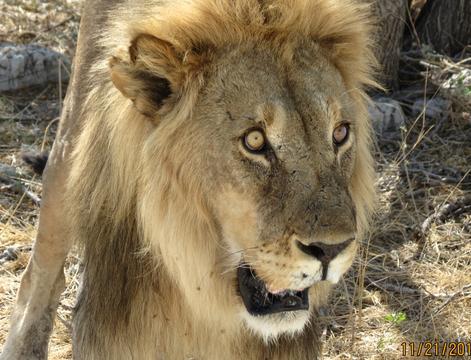