I arrived in Saigon late at night and felt lucky to have a ride waiting to my hotel.  I remember the  brutal humidity hugging me tight even around midnight, especially after a long flight with packaged air.  With the time change, I felt uneven, as expected, and I was hungry but it was best to sleep and wait for breakfast to try to adjust my internal clock.

The next morning I introduced my waiting appetite to that magical potion known as Pho and I was hooked.  I still have to make periodic visits to a local Vietnamese restaurant for a fix.  The concept of hot beef soup with scallions and chilies for breakfast is probably a conflicting exercise for some people, especially in the heavy heat of Vietnam.  But I found it to be delightfully addictive.

Since it was my first day in a new country, my reaction was to immediately venture out into the streets of Saigon.  But I wasn’t going anywhere until I had mastered how to cross a street in Vietnam.  And this is why you buy travel insurance.  If you can’t manage to replicate the most successful execution of Mario brothers, at least the insurance will help to manage your hospital expenses.  It takes strong fortitude to charge across a six lane road with the conviction that you will arrive on the other side in one piece, despite the visual evidence that you have the green light.  Silly human!!  Green, in this case, means “Go for it!”

I found the people in Vietnam to be curious and interested in talking to someone from the U.S. despite the history of the Vietnam War (known as the American War there).  As in most places, our commonalities rise above our differences.

One of the best moments was hiring some bicycle rickshaws late one night in Hue (late meaning 9 or 10 p.m.) to tour around the city.  There were only three of us, each in our own rickshaw, each with our own young man as a driver asking us questions that are typically off limits in the U.S.  (How old are you?  Are you married?  How many children?  Why no children?)  Surprisingly, the streets were relatively empty at 10 p.m. and the heat had backed off just enough that we could enjoy the ride through the quiet dark streets, the only interruption was that of us talking to each other and laughing with our young guides.

Saigon (or Ho Chi Minh City)
Two visits separated by only six years left me shocked at the progress in such a short time.  For instance, when I pulled out my smart phone in the taxi, I was able to get Wifi!

Where to stay and eat:  The Intercontinental is a beautiful hotel in a great location.  There are shops, great restaurants and the market just blocks away.  The Temple Club restaurant had great food and chic decor.
With so many tourists visiting, there are many good choices for food and the authentic Vietnamese cuisine is interesting and delicious.

Hoi An
My favorite city in Vietnam, we were based in Hoi An while I volunteered with Global Dental Expeditions.  The actual clinic was about 40 minutes away but Hoi An was a great place to spend our evenings after a long day at the clinic.  UNESCO recognizes it as a World Heritage Site and the charm of the ancient city will quickly draw you in.  It was small enough to walk or bike around (bikes were provided free at the hotel) and you felt like you could see everything.  If you prefer, you can hire a bicycle tuk tuk and leave the driving to a local.
We were close to the ocean and a stroll to the beach left us a bit puzzled to see the young men and women playing in the ocean fully clothed.  Modesty is the rule in southeast Asia, so be prepared to only see Westerners in swimsuits (swimming costumes, togs, etc.).  For the young Vietnamese men and women, being fully dressed did not seem to have any effect on the fun while running through the waves.

Dental Clinic, Volunteer Work:  The dental clinic was a special event for many of the children who had never visited a dentist before.  We had young girls show up in their best clothes - sometimes dressed as little princesses in pastel dresses with ruffles and sequins.  But most arrived in their school uniforms, hesitant to participate in this new adventure.  My role was to act as assistant to one of the dentists, wielding the suction wand and providing the amalgam, condenser, and other instruments as needed.  The local staff was incredible to work with and they were experts at their jobs.  We were completely dependent on generators for power - subject to random stops.  There was an outhouse behind the school and with every visit, you were sure to praise indoor plumbing, toilet paper, and air conditioning.  I was there in November and the heat was a constant drain on energy.  I kept imagining what it would have been like to be 18 or 19 years old and fighting a war in full military gear and boots with no refuge from the sun and humidity.
Children were quick with “Hellos” but couldn’t participate in much English beyond that.  It didn’t matter as their smiles were the only conversation we needed.  Lunches were beyond expectations with bountiful dishes to try and relish, leaving us feeling stuffed and sleepy for the afternoon dental sessions.

Where to stay:  Although our hotel for our volunteer trip was a nice hotel, one day we treated ourselves to lunch and some spa treatments at The Victoria, a luxury hotel by the ocean.  Take advantage of the wonderful foot massage offered by the pool while taking in a view of the beach and the ocean.  After working for six straight days in the dental clinic it was a much needed treat.

To See/Do:
In the ancient part of the city, you will want to cross the quaint and beautiful Japanese Covered Bridge.  There are a few museums you may want to wander through but I enjoyed walking around the old part of the city poking into the little shops looking for truly unique souvenirs.

Hue
We arrived in Hue to enjoy a break from the humidity but not from the heat.  Midday temperatures left us thirsty and seeking shade.   A really fun thing to do in the evening (when it’s not so hot, or during the day if it’s not so hot) is to rent a bicycle taxi and have them take you around the city, around the market and over by the Forbidden City.

Hotel:
We stayed at the Hotel Saigon Morin.  It was really nice and the rooms were HUGE - bigger than some apartments I’ve lived in!  They had a little spa there and it’s always worthwhile to treat yourself to a foot massage, a manicure, and a pedicure.

Food:
As in the rest of Vietnam, there were many good choices for food.  One night we all had a craving for pizza (what could be more American?) and tried the Little Italy restaurant.  It provided satisfaction to our craving and we even found some sorbet down the street for dessert.

Hanoi
When we arrived in Hanoi, I felt like I was in a new country - it was somewhat cool and rainy and residents were bedecked in winter coats.  The actual temperature was what many Americans would consider “jacket” weather but compared to the heat and humidity of the south or the summer in the north, it was quite a bit colder for them.

Shops:
Investigate Nha Tho street, Hang Gai street, and Nha Chung street in the Old town district for unique and interesting little shops.   Some of the shops I found:

According to Lonely Planet, Halong translates as “where the dragon descends into the sea.”  You can imagine the scaly back represented by the thousands of limestone karsts (islands) - humps of hills covered with forest.  Maybe it was the time of year, but Halong Bay seemed to be a very bleak little village until our boat ride into the famous bay.  Our ride lasted all morning as we circumnavigated around the “dragon”.  We visited one of the caves, motored around the bay, and then had a wonderful seafood lunch on board – one of the best meals I had there.
The hotel was not great and there was really not much to do there except the boat ride through the bay.  I don’t know that I’d recommend spending more time than necessary in the small town but Halong Bay itself, a UNESCO World Heritage Site, is worth the trip.  The site is about a 4 hour bus ride from Hanoi so it will require an overnight stay for a proper visit to the bay. 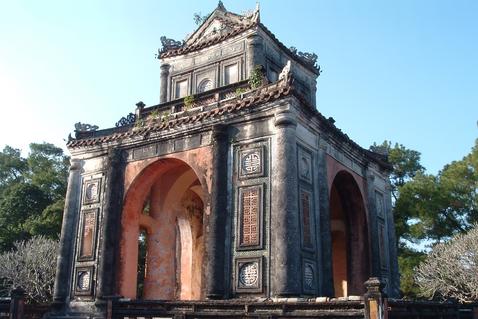